The 1980s were headed into frightening times politically. The threat of war and potential nuclear conflict was pervasive. So naturally music would reflect the times, right? Sure thing....Bette Davis Eyes, Nine To Five (Morning Train), This Ole' House, You Weren't In Love With Me, and Just The Two Of Us were what people were buying – they reflect the times, right?

Okay, okay.....I loaded up some songs that were the antithesis of the films under question, but just wanted to make a point that what was popular in the mainstream was still a long way from the more edgy music that rock fans were taking joy and catharsis in. While a lot of the new wave of music wasn't necessarily focusing on the fears of the world, its often jittery nature and aggressive sounds surely reflected the state of the world (that's my theory and I'm sticking with it). 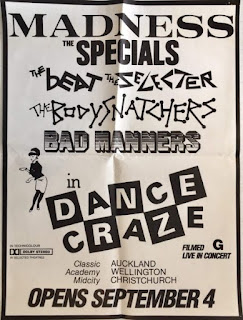 Tim and Bernie look at a pair of films released in 1981. For the main part, they discuss Urgh! A Music War, a concert film showing the diversity of the “new wave” / post punk bands of the era. How else are you going to find a connection between Klaus Nomi, XTC, Gary Numan and The Cramps? It's a great time capsule of the era showing that musicians didn't choose (at least at first) to play it safe, but still found varying levels of success. They also look at a film more musically focused called Dance Craze – a concert film featuring a range of bands from the British ska revival of the late 70s / early 80s. While any of these bands could have easily fit into Urgh! A Music War, it's great that Dance Craze exists as a companion piece.

Later in the show, I speak with director and friend of the show, Skizz Cyzyk about a documentary he's been working off and on for many years called Urgh! Revisited. Acknowledging that there's not much information out there about U!AMW, Skizz has interviewed a range of musicians from the original film about their recollections of the era, and how the film got made. Hopefully, he gets to finish it and put some perspective on a cherished film without much documented history. Our huge thanks to Skizz for joining us.

U!AMW can be found on Kanopy in some regions, or at https://archive.org/details/urghamusicwar

You can find out info about Skizz's film and music adventures at http://www.skizz.net/