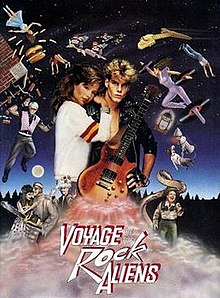 Would you be tempted to watch a film where aliens travel around in a space ship in the shape of a Flying V looking for the source of rock and roll in the universe? How about if it involved a high school romance, a battle of the bands, escaped mental patients armed to the teeth, and a polluted lake?

Tim, Bernie, Maurice and friend of the show Paul Ryan have done just that.....and had a conversation about it for your aural pleasure.

Voyage Of The Rock Aliens is a forgotten musical from 1984, made in an era when instead of the MGM musicals of yesteryear, we were presented with Can't Stop The Music and The Apple. Like many musicals from the 70s and 80s, Voyage combines fantastical elements with popular music....at least what was popular in the mid 80s....so synths, Linn drums, big hair and space costumes are the order of business here. Did we mention that Jermaine Jackson appears in the opening minutes of this film for NO REASON AT ALL????

When aliens are looking for where rock and roll music is in the universe, they're going to trace it to a town called Speelburgh (ho ho ho) where they hear techno music being sung by Pia Zadora....because, yeah....

The film attempts to be a parody of several different styles of film making – is it successful? Download the episode and we'll tell you.

Our gratitude to Paul for bringing this suggestion to the show and joining us to discuss it. As Bernie said, “Thanks a bunch, Paul”. You can find the film on Youtube at https://www.youtube.com/watch?v=DEWQH1ajnbk&t=1007s