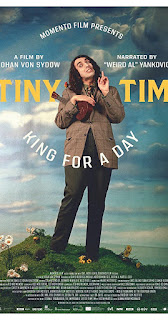 There are singers who perform covers.

There are song interpreters.

(Not Tiny) Tim, Bernie and Maurice welcome film maker Johan Von Sydow to the show to talk about his new documentary Tiny Tim: King For a Day. If you only know Tiptoe Through The Tulips, be prepared to discover a whole lot more about the man known mainly for falsetto singing and ukuleles. Johan’s excellent film reveals the story of a man who was defined in the public eye more by his (undeniable) eccentricities than by his talents. The film follows the difficult home and social life of Herbert Butros Khaury until he evolved into Tiny Tim, a walking jukebox of tin pan alley songs. The contradiction is that he appeared to embrace the perception of him as “freak” as much as it hurt him personally.

Our gratitude to Johan for talking to us about his wonderful film and Tiny in general. It is getting cinema screenings and will make its way to a VOD / streaming platform in due course. We talk about Tiny’s religious conflicts, his very public marriage on the Carson show, the range of music he interpreted, the wonderfulness of his debut album, and the process it took to assemble this film including having the voice talents of Weird Al Yankovic to read from Tiny’s diaries.

Warning: Maurice does a terrible Tiny Tim impersonation at the show’s start….he has no shame.

Keep up with any information about screenings of the film by going to the Facebook  page for the film, https://www.facebook.com/Tinytimkingforaday