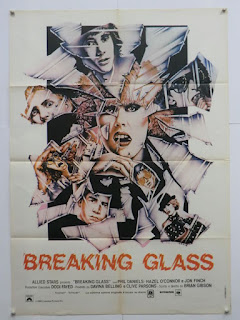 Music must change. It always has and always will. The common story (probably part truth and myth) is that punk emerged in the UK as a reaction to the so-called “dinosaur” bands...the ones that had been around for a whole 10 or so years (we'd laugh at that notion now....). Bands that were bloated on their success and measured that success on excess...the supposed antithesis of the early days of popular music. Punk burned brightly, but quickly gave way to the “new wave” of British bands. A large umbrella for many bands who often had little in common.

Tim is absent for this episode for the most wonderful reason...he's getting married on Halloween to his fiance' Maria (Bernie and I love you both). We invited long time friend and host of The Projection Booth, Mike White, to help round out the trio. Mike selected this month's film, Breaking Glass released in 1980. Starring Hazel O' Connor, it's set in Thatcher's England and tells the story of a singer who just wants her music to be heard. At that time, artists of the British new wave were exploding (not in the Spinal Taps' drummers sense...) in popularity. O' Connor plays Kate who is part of this musical dawn, but has to fight crooked music publishers, radio station apathy, the National Front and eventually, her own success. It's an oft repeated story, yet still has a vitality set in this musical and historically troubled period.

Our gratitude goes out to Mike for joining us again. You can (and really should) subscribe to The Projection Booth wherever you download your shows or at the website https://www.projectionboothpodcast.com/