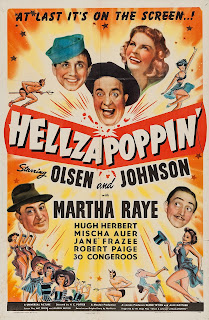 The early history of musicals often includes romantic comedies with slight plots as an excuse for big song and dance numbers (often in the context of “let's put on a show”). The romantic sub-plot is a big criticism of the Marx Brothers films at MGM, getting in the way of the anarchy of the masters of mirth.

In 1941, a musical was released by Universal that broke all the rules of narrative and made fun of those romantic subplots.

After 3 years on Broadway, a Vaudeville revue of song and sketches called Hellzapoppin' was made into a film. Knowing that it was unfilmable in its stage form, it was recreated as something completely different. This may not have been the first film to smash down the 4th wall, but it made it into an artform. Hellzapoppin' also features satire, surrealism, self mockery a film within a film within a film....and some great dancing and even a few good songs (we ARE a music film podcast, after all).

A plot description of Hellzapoppin' would not do it justice..... Marx Brothers mixed with Warner Brothers cartoons is the best I can come up with. Check out the film at https://youtu.be/c2TOriWWSLE then listen to our thoughts. Bernie, Tim and I acknowledge that in many respects the film is way ahead of its time (we discuss what we believe it influenced) and in others is of its time. We don't all agree on its merits, but we had a great discussion and hope you enjoy.

See Hear is proudly part of the Pantheon Network of music podcasts. Check out all the other wonderful shows at http://pantheonpodcasts.com The list of new shows is always increasing.