See Hear Podcast Episode 84 - Interview with Bill Jones and Ben Timlett, directors of "Before We Was We: Madness by Madness" 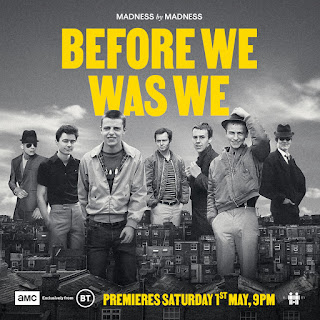 The late 70s moving into the 80s was a time ruled by conservative government in the UK. There were clashes with government ideology and the NF was scarily making its collective voice heard. Musicians reacted in different ways. There was the Rock Against Racism march with a huge concert featuring The Clash and other great punk acts of the day. As well as punk music, the other style that brought black and white people together was ska – a revival of the music made popular in Jamaica in the 1960s. The main acts spearheading the second wave of ska were The Specials, The Beat, The Selecter and Madness

Madness were less overtly political than their contemporaries, but by writing personal songs about daily life and how people living in England were coping, they still fit in as a political band. Of course at the time, their image was all about having “the nutty sound”, so people would dance to their hugely catchy and popular tunes. Often, the subject matter was darker than people remember.

Bernie was absent, but Tim and I were thrilled to go one step beyond and speak to the directors of a new 3 part documentary about Madness called “Before We Was We”. Bill Jones and Ben Timlett joined us to talk about the making of the documentary, the band's music, petty crime and the NF controversy. Also, as an added bonus, we got the time to talk about an earlier documentary the gents made called An Accidental Studio about Handmade Films, the company George Harrison established just so he could watch an obscure film directed by Bill's dad....

“Before We Was We: Madness by Madness” will debut on the AMC network on May 1, 2021. Keep an eye out for viewing opportunities beyond that. Our gratitude to Bill and Ben for their time and excellent conversation. Many laffs ensued.

See Hear is proudly part of the Pantheon Network of music podcasts. Check out all the other wonderful shows at http://pantheonpodcasts.com The list of new shows is always increasing.

Email ThisBlogThis!Share to TwitterShare to FacebookShare to Pinterest
Labels: Before We Was We, Madness, One Step Beyond, Prince Buster, ska, The Specials, Two Tone
Newer Posts Older Posts Home
Subscribe to: Posts (Atom)