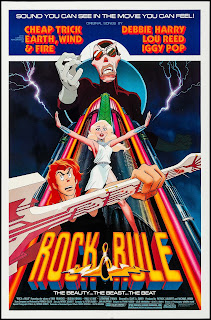 Say you're in a band, and you're struggling to get your songs performed because the self-appointed leader is a narcissistic arsehole. Then along comes an aging mega rock star who offers you a gig to sing for him so he can summon a demon from another dimension...

It's a common showbiz tale....

Welcome to episode 89 of See Hear.

Tim, Bernie and Maurice sit at the virtual round table to talk about the 1983 animated feature Rock & Rule developed by Canadian animation house, Nelvana (later known for The Care Bears Movie). The film is set in a dystopian future where earth's occupants are animals mutated into humans (because ya know....anthropomorphic animals in cartoons....) The one thing that hasn't changed is that band in fighting still exists and aging rock stars still have massive egos.

The gents talk about the history of Nelvana, Faustian tales (of which this isn't quite one), King Features, animation for adults vs animation for kids, major studio interference, and the soundtrack of this film featuring Cheap Trick, Debbie Harry, Lou Reed, Iggy Pop and Earth Wind and Fire.

What did they think? Tune in and find out.

The film is available to watch in it's entirety on YouTube at https://www.youtube.com/watch?v=knENwlh0FFA.