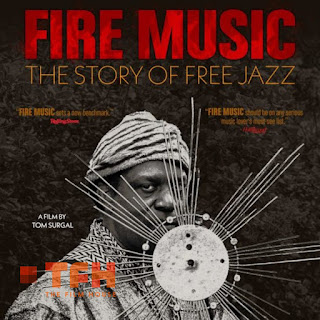 Change is difficult. Some embrace it, some resist it. It might seem obvious, but change is inevitable.

Jazz is an art form that never remained stagnant. Through creativity or financial necessity, post-war jazz moved from the big swing orchestras to smaller ensembles and bebop became the dominant form. In the late 50s, some jazz musicians decided that, as exciting as bebop was, they wanted to take jazz music in a different direction with band members not having to rely on a structure – neither rhythmically, melodically, or tonally. Avant garde jazz had its champions over the years including people like Ornette Coleman, John Coltrane, Pharoah Sanders, Cecil Taylor, Carla Bley, Albert Ayler and Sun Ra amongst many others.

Bernie and I speak with drummer and film director Tom Surgal about his great new documentary “Fire Music: The Story of Free Jazz”. His documentary tells the story of how this music was developed and supported over the years. The music had many detractors – music venue owners, jazz publications, and saddest of all, other jazz musicians – those who were afraid of the music's evolution. Given that there appears to be no attempt to put free jazz into its perspective on film (and we speak about who is possibly responsible for that).

Tom was a fantastic conversationalist and we spoke about his own performance background, how musicians took on a DIY attitude when the mainstream rejected them (and probably influenced punk years later), how free jazz musicians formed collectives, angry sounding music being full of love, civil rights, and the music's ongoing legacy. Also, Tom tells a story about Charlie Parker and Miles Davis that would probably find a happy home on Gilbert Gottfried's Amazing Colossal Podcast.

Our huge thanks to Tom for being such a wonderful guest and to Lin Culbertson (who scored the film) for organising the chat.

You can go to the website https://www.firemusic.org/ for all information about screenings and to keep an eye out for the streaming and physical media release.