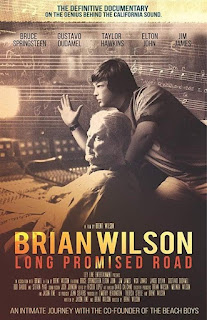 The story of Brian Wilson has been heavily documented through literature and film. There are a couple of perspectives that continuously get focus:

Do we need another film about Brian Wilson?

We welcome back to the show director Brent (No Relation) Wilson. Previously, he'd been on the show discussing his excellent documentary on Doo Wop, “Streetlight Harmonies”. This time around he joins myself and Bernie to talk about his new film “Brian Wilson: Long Promised Road”.

Much of the film is of Brian in conversation with close friend and former Rolling Stone magazine editor, Jason Fine. The two drive around Los Angeles and use various locations to trigger Brian's memory about his past – personal and creative. Because much of this film features stories directly from Wilson himself (a notoriously reluctant talker), this film is very important. He opens up in a way he hasn't for many years – the information still comes out in small drops, but we see more of who he is via the manner of these conversations, as much as what is being said....for that reason alone, we needed another film about Brian Wilson.

Brent talks to us about his passion for all things Beach Boys from an early age (when it was desperately uncool), the “hippocratic oath” he and Jason took, how Brian works with his band in the studio (and the love he inspires), and much more. Oh.....and he tells a story about something Brian said to Bono of U2.....now THAT has to be a first for See Hear.

Bernie and I are hugely grateful to Brent for sharing his time, enthusiasm and stories with us. He's promised us to come back on a future show just to yak about a favourite music film round-table style.

“Brian Wilson: Long Promised Road” is available on the usual streaming platforms like Prime (in the US), YouTube, Apple Tv, iTunes and Google Play.