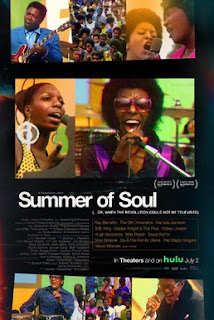 In the year 1969, Richard Nixon became president of the United States, James Earl Ray plead guilty to the murder of Dr Martin Luther King, multiple planes are hijacked to Cuba, the Stonewall Rebellion took place, and the war in Vietnam raged on.

….but there was an incredible music festival that took place for the third time in Mt Morris Park in Harlem, that for years no one recalled.

Tony Lawrence was a lounge singer who had a vision to bring some joy and positivity to Harlem. The African American population had undergone poverty and police brutality. Lawrence assembled the first Harlem Cultural Festival in 1967, but the lineup of 1967 was truly amazing. Started a full two months before Woodstock, this festival held over a series of weekends over the summer featured the likes of Nina Simone, Stevie Wonder, The Staple Singers, The Fifth Dimension, B.B. King and many others. 40 hours of festival footage was shot for local TV networks, but shortly after, the festival and its footage were forgotten by most – and Woodstock became ubiquitous in popular myth as the cultural event of a generation.

In 2021, drummer, DJ and music director Questlove released the film “Summer of Soul (Or When The Revolution Could Not Be Televised)” about that event featuring much of that magnificent footage.....but this is not a concert film in the conventional sense. There are interviews with musicians and those who attended the shows – both from the time and contemporary. To contextualise the period the show was born into, we get news clips about the moon landing, poverty, radicalism, Martin Luther King's assassination and a lot more. This footage is not slotted in as an afterthought – it goes hand in hand with the music, and is a masterpiece of editing.

Tim was not available, but Bernie and Maurice were joined by film writer, broadcaster, and commentator Emma Westwood to discuss the wonder of the event – both musically and politically. The film is completely worthy of the praise and hype. We hope to convince you that you need to see this – in a cinema or on a streaming service.

Our gratitude goes to Emma who brought an amazing conversation to the show (no surprises there). She will be back – make no mistake. Her knowledge and enthusiasm really made the show. You can find details of her work at https://emmawestwood.net/ She will soon release a book she's curated on James Whale's “Bride of Frankenstein”........Mmmmm, book GOOOOOOOOOOD.