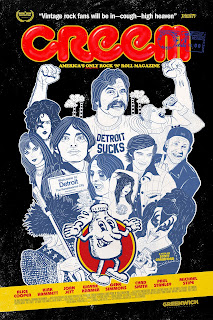 With the ubiquity of fanzines, blogs and podcasts in the 21st century, anyone can publish their critiques on any form of the arts (including your humble hosts of this very show). For better or worse, we don't have to limit ourselves to the opinions of those who claim to “know better”. There was a time, though, where we'd have to rely on information and analysis about music from the writers at publications like NME, RAM, Juke, Rolling Stone or any number of music magazines.

In 1969 in that most rock and roll of cities Detroit, publisher Barry Kramer and founding editor Tony Reay created Creem magazine. Unlike, the recently founded Rolling Stone which portrayed rock music as a serious artform, Creem was taking the piss out of popular culture – very much in line with counter culture values. It featured writers who would be gain fame and infamy like Lester Bangs, Dave Marsh, Cameron Crowe, Robert Christgau and Greil Marcus among many others who obviously loved the music being created but without being held hostage to its creators. The writers showed no fear no favour in how they wrote about bands. MC5 and Rolling Stones, “Exile On Main Street” received less than favourable reviews to start with, something that seems unfathomable now.

We're proud to welcome to the show, documentarian Scott Crawford to discuss his latest film, “Creem: America's Only Rock and Roll Magazine”. He had access to many of the surviving key players from the magazine's 20 year run and has come up with a fascinating look at how Creem was different from its competitors and why it was so beloved of many musicians. There's a gem of a story involving Lester Bangs, Dave Marsh, a typewriter and a dog. Wanna know more? Tune in.

Our huge thanks to Scott for being such a great conversationalist and for allowing us to spend time with him to talk about a truly interesting part of rock history. We at See Hear highly recommend you watch this film....here's a number of ways you can stream it. (Depending on where you are, you may need a VPN). https://www.creemmovie.com/watch-at-home/

Scott also has a great podcast called Spoke which you can check out here: https://www.listennotes.com/podcasts/spoke-scott-crawford-0zTir9pbt-A/

See Hear is proudly part of the Pantheon Network of music podcasts. Check out all the other wonderful shows at http://pantheonpodcasts.com. The list of new shows is always increasing.