See Hear Bonus episode with The Projection Booth - The Ventures: Stars On Guitars 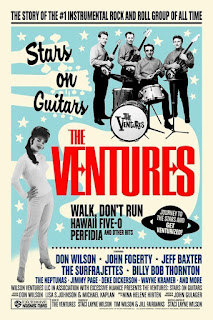 He joins Mike White and film maker / drummer / surf enthusiast Skizz Cyzyk to talk about the new documentary on the sonically adventurous and prolific Washington band, The Ventures. The film is a loving look at the career and longevity of the surf music icons, directed by Don Wilson's daughter, Staci Layne Wilson.

They talk about the surf sound and whether it's in the guitar or the song name, the band's history, their reputation as song interpreters, their relationship to their Japanese fan base, and so much more.

Run, Don't Walk to download this episode of the show.

The film is available at https://www.amazon.com/Ventures-Stars-Guitars-Don-Wilson/dp/B08N5V3Y4X

Find the huge back catalogue of Projection Booth episodes at http://www.projectionboothpodcast.com/

See Hear is proudly part of the Pantheon Network of music podcasts. Check out all the other wonderful shows at http://pantheonpodcasts.com